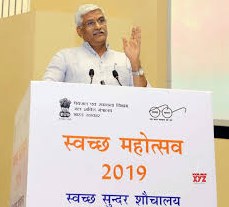 Swachh Mahotsav 2019 was held at Vigyan Bhavan in New Delhi on 6 September 2019.  The function was organised by Union Ministry of Jal Shakti. On this occasion, President of India Ram Nath Kovind presented the Swachh Bharat Awards in various categories for outstanding contribution to Swachh Bharat Mission.

President Kovind described cleanliness as pathway to success and highlighted that construction of toilets across country under Swachh Bharat Mission has become peoples’ campaign and not just a government campaign and at the same time helped in maintaining dignity of women as well as their empowerment.

President highlighted that cleanliness is also an essential condition for success of ‘Jal Jeevan Mission’ launched by government in 2019.

Best Swachh Iconic Place award:  was awarded to Vaishno Devi Shrine Board in Jammu and Kashmir. The Shrine was selected on basis of overall improvement in sanitation.

Swachhta Pakhwada Award: was given to Department of Defence.

Award for Open Defecation Free (ODF) and Behavior Change: were given to Gujarat and Sikkim