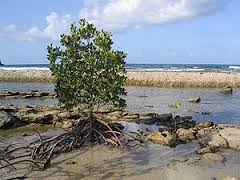 Data obtained from latest study conducted using remote sensing and GIS for the first time has offered definite proof that the mangrove forest cover in Indian Sunderbans has been depleting alarmingly.
From 1986 to 2012, 124.418 sq km or about 5.5% of the mangrove cover of Sunderbans was lost. Moreover, variable degrees of erosion were also observed in at least 18 islands. The continuation of this process is a serious ecological threat.

Total forest cover of the Indian Sunderbans as assessed by remote sensing studies for the year 1986 was about 2,246.839 sq km.  It has gradually declined by 2,201.41 sq. km. in 1996, then down to 2168.914 sq km in 2001 and to 2122.421 sq km in 2012.  The loss in the mangrove forest in the Indian Sunderbans is about 5.5 %.
The continuation of this process in response to climate change and sea level rise poses a serious threat to the carbon sequestration potential and other ecosystem services of this mangrove forest in future.
The study also highlights a time series of the erosion of at least 18 mangrove forested islands of the Indian Sunderbans from 1986 to 2012. These islands include Sagar, Gosaba, Dulibhasani, Dalhousie, Bhangaduni and Jambudwip. The mean sea level rise is considered a driving factor for coastal erosion, coastal flooding, increase in the number of tidal creeks and losing land.
The loss land, including mangrove forest is mainly due to decrease in fresh water flow and sediment supply in the western (Indian) part of the delta, and the rate of sea level rise is higher than sediment supply.  However, the eastern (Bangladesh) side of the Sunderbans delta is gaining land because of the huge amount of sediment and water flow from the Brahmaputra and Meghna rivers.
Critical minimal inflow of freshwater is necessary for the luxuriant growth of mangroves.  Decrease in freshwater inflow results change in mangrove succession where freshwater loving species of mangroves are replaced by salt-water loving ones. This immediate impact of salinity will also have negative impact on the fishing community, as commercially sought fish species will be replaced by fish that does not have as much market value.

Sundarbans is a vast mangrove forest in the coastal region of the Bay of Bengal. It covers approximately 10,000 square kilometres of area of which 60% is in Bangladesh with the remainder in India. It is located in the delta region of Padma, Meghna and Brahmaputra river basins. It is the largest tidal halophytic mangrove forest in the world.
In 1997, Sundarban was recognized as UNESCO World Heritage Site. Sundarban forests are known for its self- Royal Bengal Tiger and other numerous species of animals, including Chital Deer, Crocodile and Snakes. In May 1992, it was recognized as a Ramsar Site.