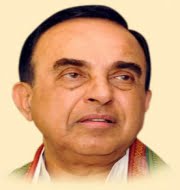 Senior BJP leader and Rajya Sabha MP Subramanian Swamy has been honoured with Tamil Ratna award by America Tamil Sangam (ATS) in New York.
He was bestowed with this award for fighting corruption and working for more transparency in the functioning of the government.