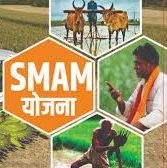 In the Union Budget 2021, Rs. 1050 crore budget has been allocated for Sub Mission on Agricultural Mechanization (SMAM) for the financial year 2021-2022.

Why this scheme was launched?

Components of the scheme

The scheme comprises of following components:

Achievements under the scheme

Ever since the scheme was launched in 2014, Rs.4556.93 crores of funds have been released under the scheme for the States during the financial year 2014-2015 to 2020-2021. Under the scheme, around 13 lakh agricultural machines have been distributed so far. Also, 27.5 thousand Custom Hiring Institutions have been established as of now. The programs and schemes on farm mechanization have also increased the availability of the farm power per unit area. This power is used to perform various agricultural operations.