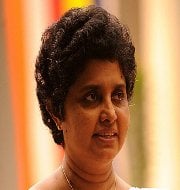 Sri Lanka’s new government led by President Maithiripala Sirisena has reinstated former Chief Justice Shirani Bhandaranayake to her former position.
She was impeached by the previous government of former President Mahinda Rajapaksa.
With this move, country’s new government is attempting to deliver on election promises assuring independence of the judiciary.

Earlier in January 2015, Sri Lanka’s new government had reinstated the rank of former army Chief General Sarath Fonseka, who was stripped of all ranks and sentenced to jail by Rajapaksa.
General Sarath Fonseka was Sri Lanka’s only four-star general who had led the Army to defeat the Tamil Tigers in 2009. In 2010, he had fallen out with Rajapaksa and challenged him in the election of 2010. Thereafter Fonseka was arrested, court martialled and jailed for corruption.