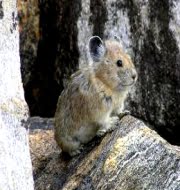 Scientists have discovered a new species of Pika, a mammal belonging to the rabbit and hare family in the Himalayas in Sikkim.
It has been identified as ‘Ochotona sikimaria’. It is quite distinctive from all other pika species based on the fecal pellets and tissue samples.
Ochotona sikimaria Pika species looks similar to the Moupin Pika, genetically it is completely different. Their specific differences are not visible in physical observation. But they are genetically very different.
Key Facts