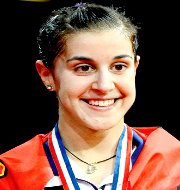 World number one women shuttler Carolina Marin from Spain has won the 2015 Female Badminton Player of the Year award.
She was presented with the award by the Badminton World Federation (BWF) President Poul-Erik Hoyer in Dubai.
India’s Saina Nehwal along with Zhao Yunlei of China (2014 winner) and another Chinese Bao Yixin were in race for this annual award in Female category.
Other categories winners

Carolina Marín is currently ranked No. 1 in the world by Badminton World Federation Women’s Singles 2015 rankings. She has won in World Championships in women’s single category two times in 2014 and 2015 respectively. She also has won five World Superseries titles.