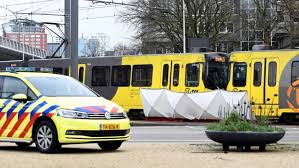 In a central Dutch city of Utrecht, three people were killed and 9 wounded after an armed man opened fire in a tram. The Dutch government has raised the level of threat to highest and Prime Minister Mark Rutte has stated that they are making every possible effort at suspects. In a statement made to the press, he said, “Our country has been jolted by an attack in Utrecht. Police and prosecutors are looking into what exactly happened. What’s known now is that there was shooting at people sitting in a tram in Utrecht, that there were wounded and, possibly deaths”.

The whole area was flooded by police and other officials after the shooting on Tuesday morning at a busy traffic intersection in a residential neighbourhood. The city police have issued a picture of a 37-year old man born in Turkey Gokman Tanis and said “Do not approach him yourself, but immediately call” authorities.  As the threat level was raised the schools were made to shut down. There was additional security seen at the airports and other important points of infrastructure. Security at the mosques was also increased. Emergency and other medical services had also reached the scene of the shooting. The political parties have suspended their campaigning activities for the elections which are due for tomorrow in the wake of the attack.

Prime Minister also said that he was completely taken aback by the attack which has come only three days after the deadly mosque shooting at Christchurch, New Zealand. He said, “ an act of terror is an attack on our open and tolerant society. If this is a terror attack, then there is only one answer: our rule and democracy are stronger than fanaticism and violence. We will not accept intolerance.”

Three days before, there had been a deadly gun attack on two different mosques in New Zealand which has rocked the conscious of the world. 50 people had died in the same and another 50 wounded in the hate-filled attack. The suspect, Brenton Harrison Tarrant is an Australian and is 28 years of age. He is said to carry grave feelings against immigrants. Authorities had found a long 87-page manifesto which was filled with anti-Muslim and anti-immigrant thoughts. New Zealand is all set to reform its gun laws.

The Dutch attack within days of Christchurch tragedy has gripped the Western world with grief. These show the presence of intolerance in Western cultures.