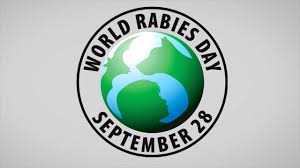 The World Rabies Day is marked by the Global Alliance World Rabies Control. It is a non – profit organization. The headquarters of the organization are located in United States. The day is endorsed on the anniversary of death Louis Pasteur who developed the first rabies vaccine.
The aim of World Rabies Day is to create awareness about the impact of rabies on human and animals, increase efforts of rabies control, create awareness about prevention of the disease.
Theme: “Rabies: Vaccinate to eliminate”

One of the SDGs is to reduce human deaths from dog transmitted rabies across the world to zero by 2030.

It is a non profit organization that currently aims to implement the above SDG. It was established in 2007. Its main functions are dog vaccination, surveillance, diagnosis, education and community out reach.

The first Word Rabies day campaign was organized on September 8 2007. It was partnered by the Alliance for Rabies Control and the Center for Disease Control and Prevention (USA).

In 2013, the WHO, FAO and World Organization for Animal Health released a joint statement on global elimination of rabies on the World Rabies day. Hence, they joined the campaign. In 2015, 33 African countries joined the campaign by organizing a Pan – African Rabies Control Network.

Rabies is a viral disease and is fatal by the time its symptoms start appearing. It causes inflammation in the brain and disrupts mental functions. According to National Health Policy, around 59,000 people die of Rabies every year all over the world. 90% of the death occur in children living in Asia and Africa.

It takes 2 to 3 months for the symptoms to occur. The initial signs are fever and head ache which are often unnoticed. Hydrophobia or the fear of water is the most common symptom of rabies. In the later stages, it causes anxiety, paralysis, insomnia, anger, paranoia, terror, etc.

How does rabies spread?

In India Rabies is a major health problem. According to National Health Policy, around 20,000 people die of rabies annually. In India, the disease mostly occurs in children in the age between 5 and 15.

India controls rabies through Animal Birth Control and rabies vaccination. Through the Animal Birth Control program, the animals are made sterile and their breeding stops and hence their population declines. India also uses Rabies vaccines to prevent rabies. All the street dogs are vaccinated under the program. The ABC – AR program is conducted by the Animal Welfare Board of India.

Mission rabies is a program being organized annually by the Worldwide Veterinary Service since 2013. The street dogs are vaccinated under the program. The program is currently conducted in India, Sri Lanka, Malawi, Tanzania and Uganda.