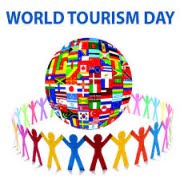 The colour of World Tourism Day is Blue. In 1997, the UNWTO decided to designate a host country to act as its partner to celebrate the day. However, this has been replaced this time.

For the first time in the history of World Tourism Day, the day was hosted by nations from the Mercosur Bloc. Usually, the day is hosted by a single member state of the United Nations.

It is an economic and political bloc. It includes Brazil, Argentina, Paraguay and Uruguay. The associate members of the bloc are Chile, Bolivia, Colombia, Guyana, Ecuador, Peru and Suriname. The main objective of the bloc is to promote fluid movement of goods, current and people and also promote free trade. The official languages of the bloc are Guarani, Portuguese and Spanish.

The Bloc was established under Treaty of Asuncion in 1991.

According to the United Nations World Tourism Organization, around 100 to 120 million jobs in the tourism sector are at risk.

During the celebrations, the minister of tourism Shri Dharmendra Pradhan to adopt 100% clean fuel for prime tourist cities. This will help protect the monuments in the country and ensure cleaner environment.