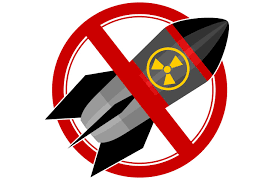 Every year September 26 is marked as the International Day for total elimination of Nuclear weapons. It is being observed since 2014. The day is observed to enhance public awareness about the threat posed to humanity by nuclear weapons.

The United Nations General Assembly declared the day in 2013 through a resolution 68/32. The resolution was passed at a high – level General Assembly on Nuclear disarmament. In the resolution the assembly called in for urgent commencement of a conference. The conference was held on Disarmament of convention of nuclear weapons and to prevent the possession, production, testing, stockpiling and transfer of nuclear weapons.

Every year the day is marked by the ICAN campaigners all around the world.

ICAN is the International Campaign to Abolish Nuclear Weapons. It received the Nobel Prize for peace in 2017. It is a non – Governmental Organization that promotes and implements Nuclear weapon ban treaty or the treaty on Prohibition of Nuclear Weapons.

In 2017, ICAN came up with an international treaty on prohibition of Nuclear Weapons. The treaty was first in its kind. It is an international agreement to prohibit nuclear weapons. Till August 29, 2019, only 26 states have ratified it. In the UN, a resolution can be ratified only if a minimum of 50 countries ratify it.

India denounced from voting in favor of the resolution.

Who are the current Nuclear powers in the world?

US, Russia, France, Britain, India, China, Pakistan and North Korea. There are 5 European countries hosting US Nuclear weapons in their soil as a part of NATO treaty. It includes Germany, Belgium, Netherlands, Italy and Turkey. According to the UN, there are 14,000 nuclear war heads in the world.

Obstacles on the path of Nuclear free world

The Iran Nuclear deal that was signed to prevent Iran from producing nuclear weapons was collapsed after the US President announced the withdrawal of US from JPCOA plan.

The nuclear weaponization in North Korea aim at hitting the west coast of US according to the experts.

The odds between India and Pakistan came close to an armed conflict earlier this year. The situation has become more precarious after India changed the constitutional status of Kashmir recently.

The countries holding the highest number of nuclear weapons, US and Russia recently decided that they would no longer honor the INF treaty – Intermediate Range Nuclear Forces. The treaty prevents the countries from developing missiles that are capable of carrying nuclear weapons.