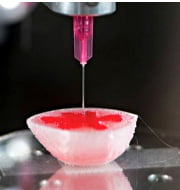 Scientists in the United States including those of Indian origin have successfully grown three-dimensional (3D) lungs in the lab, using stem cells.
The 3D lungs or organoids was created by coating tiny gel beads with lung-derived stem cells and then allowing them to self-assemble into the shapes of the air sacs found in human lungs.
To show that these tiny organoids mimicked the structure of actual human lungs, researchers compared it with real sections of human lung.
Significance: The laboratory-grown 3D lungs can be used to study diseases including Idiopathic Pulmonary Fibrosis (IPF) which has been difficult to study using conventional methods and also test possible treatments for the lung diseases.
What is Idiopathic Pulmonary Fibrosis (IPF)?