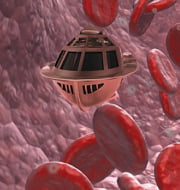 A group of researchers from University of Cambridge have built the world’s smallest (nanoscale) working engine.
The research team was led by Professor Jeremy Baumberg from the Cavendish Laboratory. They have named the microscopic engine as ANTs (Actuating Nano-Transducers).
Key facts