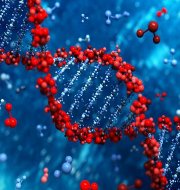 Scientists have developed world’s Smallest (Nano) Thermometer using DNA (Deoxyribonucleic acid) structures that can fold and unfold at specifically defined temperature functions.
It was developed by the scientists at the University of Montreal and the study report in this regard was published in the journal Nano Letters.
Key facts