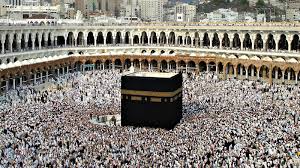 Indian Haj mission in the Kingdom of Saudi Arabia has adopted digital technology to reach out to a large number of pilgrims as part of Digital India initiative of Government of India.

It has been developed to receive feedback, a grievance from Hajis (Haj pilgrims).

At present, it receives feedback in English, Hindi and Urdu but soon other regional languages will be incorporated.

The app also connects pilgrims with Haj service coordinators (of their respective states) known as Qadimul Hajjaj. Qadimul Hajjaj are government employees who are deputed to assist pilgrims during Haj season.

Significance: With introduction of Haj App, Indian diplomats in Saudi Arabia are trying to form a bridge with pilgrims so as to facilitate a smooth and hassle-free Haj operation to them and also to receive grievances and feedbacks to improve service.

e-MASIHA (Medical Assistance System for Indian Hajis Abroad) is an online platform where Health status and medical history of visiting pilgrims is being stored.

It would retrieve pilgrims’ health information to apply appropriate treatment whenever he or she visits Indian medical facilities during Haj.

Besides App, other means to connect the officials and pilgrims are website and social media channels, toll-free numbers and exclusive in-house Youtube channel.

SIM Cards: Pilgrims are being provided Saudi Arabian mobile SIM card in India itself. These SIM cards can be activated in their buildings in Madinah and Makkah after recording their biometrics. Also, Biometrics is a mandatory requirement for issue of SIM cards in Saudi Arabia.

It is an annual Islamic pilgrimage to Mecca in Saudi Arabia the holiest city for Muslims.

This year 2332 single women are travelling for Haj under Centre governments’ Haj without ‘Mehram’ (male companion) initiative. In a bid to empower Muslim women, Narendra Modi government has removed restriction on single women pilgrims to travel and encouraged them to apply for Haj.

The Government of India is to launch National Programme on Artificial Intelligence. Under the progra...

The Ministry of Commerce and Industry recently notified Copyright (Amendment) rules, 2021. The amend...