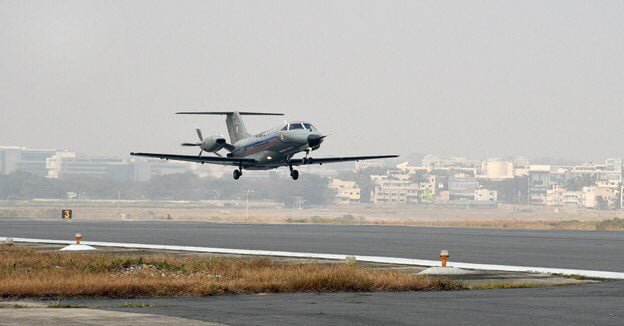 SARAS PT1N, the new upgraded version of indigenous transport aircraft SARAS developed by National Aeronautics Laboratory (NAL) successfully made its maiden flight in Bengaluru, Karnataka.
The aircraft took off from HAL airport, Bengaluru and flew for about 40 minutes at the maximum height of 8500 feet at the speed of 145 knots.
The primary objective of the test was to evaluate system performance that will be collected in about 20 flights. The data collected from this shall be used to freeze the design of production version aircraft.

SARAS PT1N is a 14-seater passenger aircraft designed and developed by CSIR-NAL, a frontline aerospace research laboratory. The production version aircraft will have 19-seat capacity.
The indigenous aircraft development is seen as culmination of efforts of team CSIR-NAL, IAF-ASTE, Centre for Military Airworthiness and Certification (CEMILAC), HAL and Directorate General of Aeronautical Quality Assurance (DGAQA).

The aircraft programme is named after Indian crane Saras. It was first conceptualised in the 1990s to establish short-haul civil aviation market. The original design of the plane included maximum take-off weight of 6,100kg and a maximum payload of 1,232kg.
The first prototype of the plane had made its first flight in May 2004. SARAS PT1N is upgraded version of plane, after second prototype of SARAS that had crashed during test flight killing all three crew members on board in March 2009.