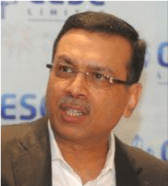 Sanjiv Goenka was nominated by the President, Pranab Mukherjee, in his capacity as Visitor of the Institute.
With this appointment, Sanjiv Goenka will serve his second term as the Chairman of Board of Governors at the IIT-KGP. He held his previous stint between 2002 and 2007.
Previously, Sanjiv Goenka had served as a member of the Prime Minister’s Council on Trade & Industry; and also on several academic institutions as member and chair of its Governing bodies.

The Board of Governors is the highest administrative body of the IIT-KGP. The board comprises of the eminent panel of members including Arundhati Bhattacharya, Chairperson, State Bank of India; Sudha N Murty, Chairperson, Infosys Foundation; N Balakrishnan, IISc Bangalore and Jai Pal Mittal, M N Saha Distinguished Professor (NASI).
PP Chakrabarti, Director at IIT Kharagpur and Pradip Pyne, Registrar are Ex-Officio Members. Dipanwita Roy Chowdhury and Manoj K Tiwari, who all are the institutional representatives serve as Senate representatives of the Institute.

IIT-KGP, which is recognized as an Institute of National Importance was established in 1951 by the Government of India. It was the first IIT to be established in the country.