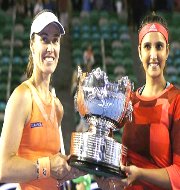 Ace Indian tennis player Sania Mirza and her Swiss partner Martina Hingis have won the 2016 Australian Open title of tennis in the women’s doubles category.
In the final match played at Melbourne (Australia), the top seeded duo defeated seventh seeded Czech pair of Andrea Hlavackova and Lucie Hradecka by 7-6 (1), 6-3 score.
It was overall there 12th title together after they had teamed from 2015. It was also their 36th match win together in a row. It is their and their maiden Australian Open title.
Their 11 WTA doubles titles are: Indian Wells, Miami, Charleston, Wimbledon, US Open, Guangzhou, Wuhan, Beijing and the WTA Finals in 2015 and followed by Brisbane (2016) and Sydney (2016).