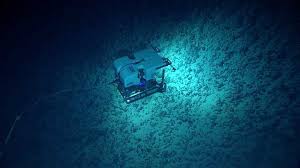 National Institute of Ocean Technology (NIOT) will launch ‘Samudrayaan project by 2021-22 to explore the deep sea region. It is pilot project of Union Ministry of Earth Sciences as part the Rs 6000 crore ‘Deep Ocean’ mission for deep ocean mining of rare minerals.

It proposes to send indigenously developed submersible vehicle with three persons to a depth of about 6000 metres to carry out deep underwater studies.  It will be undertaken by the NIOT, Chennai and is in line with ISRO’s ambitious ‘Gaganyaan’ mission of sending an astronaut to space by 2022. It is expected to become a reality by 2021-22. The indigenously developed submersible vehicle developed as part of this project is capable of crawling on sea bed at a depth of 6km for 72 hours. Whereas, currently submarines deployed can only go about 200 metres deep into the sea. The project will go deeper in phases with more trials and ocean mining is expected to commence in 2022. The expenditure of this ambitious project is expected to be around Rs 200 crore.

Significance of Project: If it is successful, India will join selected league of developed nations in the exploration of minerals from deep oceans. Developed countries have already carried out such missions. India could be 1st developing country to undertake such a project.