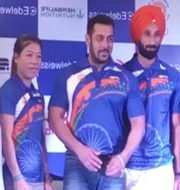 Bollywood actor Salman Khan was named as the goodwill ambassador of the Indian contingent for the upcoming Olympics to be held in August 2016 in Rio de Janeiro, Brazil.
This is the first time when a Bollywood superstar has been chosen as a goodwill ambassador for the Indian contingent at the Olympics.
He was chosen by the Indian Olympic Association (IOA) from a list of two to three candidates which also included Shah Rukh Khan and veteran actor Amitabh Bachchan.
IOA has chosen Salman Khan as he is considered to be more connected with the youth and sportspersons and also is considered as a youth icon for bodybuilding fans across the country.