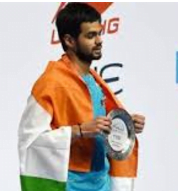 Sai Praneeth defeated the world No 29 Kidambi Srikanth in an all-Indian men’s singles final and clinched Singapore Open Superseries badminton title. With this, India has become only the fourth country after China, Denmark and Indonesia to have its nationals in a men’s singles Superseries final.
Last year, Sai Praneeth clinched the Canada Open. Kidambi Srikanth has won the 2014 China Super Series Premier and 2015 India Super Series. He also reached the quarterfinals of Rio Olympics. He holds the distinction of being the first Indian to claim a Superseries title after the graded events became part of the world badminton calendar.