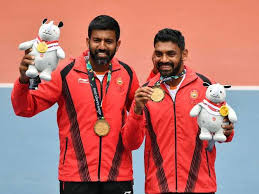 Indian tennis pair of Rohan Bopanna and Divij Sharan won gold medal in Men’s Doubles tennis at 2018 Asian Games. In the final match, they defeated Kazakhstan’s Aleksandar Bublik and Denis Yevseyv pair by 6-3, 6-4 score in a match that lasted 52 minutes. Earlier in semi-final, Rohan Bopanna and Sharan had won against Japan’s Kaito Uesugi and Sho Shimabukoro by 4-6, 6-3, 10-8 score in three-set match which lasted for 72 minutes.

It is 18th edition of Asian Games hosted by Indonesia. It was held from August 18 to September 2, 2018 in two cities – Jakarta (capital of Indonesia) and Palembang (capital of Indonesia’s province of South Sumatra). It is second time Indonesia hosting Asian Games. For first, it was held in Jakarta in 1962.
Mascots: Trio of Bhin Bhin (bird of paradise), Kaka (one horned rhino) and Atung (deer) are mascots of 2018 Asian Games. These three mascots represent east, west and centre of country and they have dress traditional to each locality.