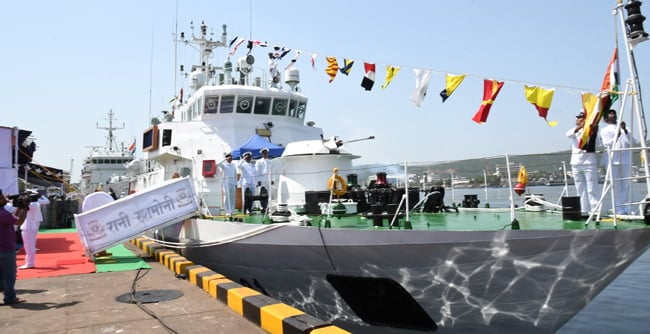 Indian Coast Guard (ICG) has commissioned fast patrol vessel (FPV) ICGS Rani Rashmoni, in Visakhapatnam, Andhra Pradesh. It is fifth and last ship to be commissioned in the series of fast patrol vessel (FPV) project of ICG. The ship will be based at Visakhapatnam under the administrative and operational control of Commander, No.6 Coast Guard District Headquarters (Andhra Pradesh).

ICGS Rani Rashmoni has been designed and built by Hindustan Ship Yard Ltd. It is 51 metre long, 8.36 metre wide and weights 346-tonne. It is named after legendary Rani Rashmoni of Kolkata. It is equipped with most advanced and sophisticated communication and navigational sensors and equipment.
The ship is propelled by three MTU 40000 series diesel engines of 2,720 KW capacity each coupled with three Rolls Royce Kamewa jets. It can achieve a maximum speed of 34 knots (63kmph). It can perform multifarious tasks such as surveillance, search and rescue, interdiction, anti-smuggling and anti-poaching operations.