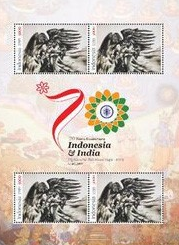 Indonesia has released a special commemorative stamp on the theme of Ramayana to mark the 70th anniversary of the establishment of its diplomatic ties with India.

India and Indonesia have shared close cultural and commercial contacts spanning back to two millennia. The Hindu, Buddhist and later Muslim faith travelled to Indonesia from the shores of India. The Indonesian folk art and dramas portray great influence from the great epics of Ramayana and Mahabharata.
The shared culture, colonial history and post-independence goals of political sovereignty, economic self-sufficiency and independent foreign policy had a unifying effect on the bilateral relations.
The foundation of the Non-Aligned Movement at the Asian-African Conference held in Bandung in 1955 and the adoption of India’s ‘Look East Policy’ in 1991, provided avenues for rapid development of bilateral relations in political, security, defence, commercial and cultural fields. The diplomatic relations have further received uplift with the Act East policy.