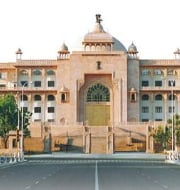 Rajasthan Assembly has passed Criminal Laws (Rajasthan Amendment) Bill, 2018 by voice vote to amend Indian Penal Code (IPC), 1860 to add provisions providing for death penalty for those convicted of raping girls of 12 years and below.
The bill will become a law after it gets Presidential assent. With this, Rajasthan became second state in the country after Madhya Pradesh approving death sentence for those convicted of such rapes.

The Bill aims at protecting girl child by laying down deterrent punishment, including death sentence, to offenders of child rape of girls below 12. It inserts sections 376-AA and 376-DD in IPC, 1860. These sections provide, that whoever commits rape or gang-rape on a girl upto 12 years of age shall be punishable with death or rigorous imprisonment. The capital punishment under it will be not less than 14 years and 20 years respectively for sections and which may extend to imprisonment for life, which means imprisonment for remainder of offenders’ whole life, and with fine.