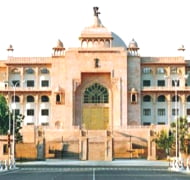 The state assembly also passed a resolution to include both the reservation bills in 9th Schedule of the Constitution which protects any legislation (law) inserted within it from judicial review.
With the passing of these bills, Rajasthan exceeds the 50 per cent reservation cap/limit laid down by the Supreme Court as they do not change the reservation quota of Scheduled Castes (SCs), Scheduled Tribes (STs) and Other Backward Class (OBCs) categories.
Presently, Rajasthan has reservation quotas amounting to 49. 5 per cent including 15 per cent for SCs, 7.5 per cent for STs and 27 per cent OBCs.