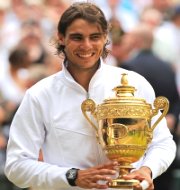 Rafael Nadal has once again won the Monte Carlo Masters for a record 10th time with a 6-1 6-3 victory over Albert Ramos-Vinolas. With this win, he has made history by becoming the first man in the Open era to win the same event 10 times.
Earlier, Rohan Bopanna and his Uruguayan partner Pablo Cuevas had won the men’s doubles crown at the Monte Carlo Masters after defeating Spain’s Feliciano Lopez and Marc Lopez in Monaco.

Monte Carlo Masters is an annual tennis tournament for male professional players which is played on clay courts. It is held in Roquebrune-Cap-Martin, France. The championship was first held in 1897. The tournament is part of the ATP World Tour Masters 1000 on the Association of Tennis Professionals (ATP) Tour.