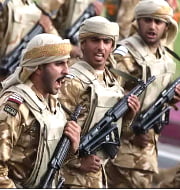 For the first time, Qatar has deployed ground troops in Yemen to counter the Shia Houthi rebels who have taken over the country.
In this regard, Qatar has deployed around one thousand ground troops, supported by armoured vehicles and military helicopters in Marib province of Yemen.
Earlier in March 2015, Qatar along with other Gulf Cooperation Council (GCC) members (expect Oman) had signed a joint statement with Saudi Arabia to form coalition in order to take military action against the rebels in order to bring regional stability in the Gulf region.