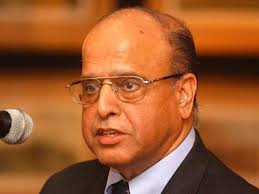 According to the report, the states were ranked in the context of sustainable development. The Governance of the states was analysed based on three pillars namely growth, equity and sustainability.

In large state category, Kerala topped the listing with an index of 1.388 followed by Tamil Nadu with 0.91, Andhra Pradesh with 0.5 31 and Karnataka with 0.468. The bottom most ranking was occupied by Uttar Pradesh, Odisha and Bihar in the same category

In the small state category Goa topped the list followed by Meghalaya and Himachal Pradesh. The bottom most states in this category were Manipur, Delhi and Uttarakhand.

Kasturirangan is a space scientist of India who headed the Indian Space Research Organisation between 1994 and 2003. He is currently serving as the chancellor of Central University of Rajasthan and NIIT University. He was awarded with the three most prestigious civilian Awards of India namely padmashri, Padma Bhushan, Padma vibhushan. He was a former Rajya Sabha member and a former member of Planning Commission of India. He is well known for his report on Western Ghats.