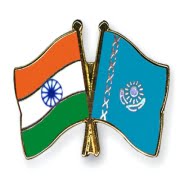 The bilateral military exercise “PRABAL DOSTYK – 2017” between India and Kazakhstan began at Bakloh, Himachal Pradesh. ‘Prabal Dostyk’ means ‘Robust Friendship’
It is second edition of the joint military training exercise between both countries. The first edition of exercise was held in Karaganda region of Kazakhstan in September 2016.

The fourteen day joint training aims to build and promote bilateral army-to-army relations and exchange skills and experiences between Kazakhstan and the Indian Army. It also aims at enhancing military ties between two countries for achieving interoperability between two armies.
The exercise will help in strengthening ties between two countries and would serve as platform for exchange of drills and procedures leading to seamless interoperability. The training contingents comprise of platoon strength from the 11th Gorkha Rifles of Indian Army and similar strength of Kazakhstan Army.
The Indian troops participating in joint exercise have undergone extensive training in counter terrorism and low-intensity conflict operations at Counter Insurgency and Jungle Warfare School, Vairengte, Mizoram.