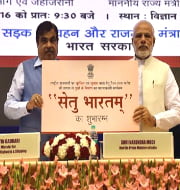 Prime Minister Narendra Modi has launched Setu Bharatam Project to make all national highways free of railway crossings by 2019.
This project will be implemented by the Union Ministry of Road Transport and Highways.
Under this project

Union Ministry of Road Transport and Highways already has launched an Indian Bridge Management System to map 1,50,000 bridges across the country. So far inventory of 50,000 bridges has been prepared under it and the first cycle of condition survey will be completed by June 2016.