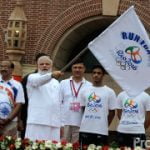 Prime Minister Narendra Modi flagged off the ‘Run for Rio’, an event to encourage the Indian contingent at the 2016 Rio Olympics beginning on August 5, 2016.
The 5km run was flagged off from Major Dhyan Chand National Stadium to the Jawaharlal Nehru Stadium in New Delhi.
In this event thousands of school children and youths had participated to express the nation’s support to the 119 Indian athletes who have qualified for the Rio Olympics.
The event was organised by Union Minister of Youth Affairs and Sports. Prime Minister also released the Olympic Brochure.
In his address Prime Minister urged the youth to work hard for 2020 Olympics and also mentioned that India’s focus should be on sending more than 200-member contingent to Tokyo.