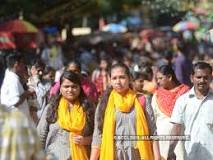 The most polluted stretch of the Ganges from Gaumukh to Gangasagar lies in Kanpur. The sewage treatment in Kanpur was inadequate with only 150-175 MLD (million litres per day) of sewage being treated and the rest of untreated sewage discharged into the river directly. The Sisamau Nala channel that was closed recently discharged 140 MLD of sewage. There are around 400 leather tanning industries in and around the city discharging unregulated discharges into the river.

The Council chaired by the Prime Minister for the first time reviewed 10 projects at estimated cost of Rs 2315 crores. It also included the diversion of Sisamau Nala channel. The Sisamau Nala drain, the largest drain in Asia was used as a sewerage conveyance channel since 1890. The drain was closed by the UP government in 2018.

Organic Farming along the Ganges

Jurisdiction of the Council

The PM is the chair person of the council. The Union Minister of Water Resources, river development and Ganga Rejuvenation are the ex-officio vice-chairperson of the council. The other members include ministers of finance, urban development, environment, tourism, drinking water and sanitation, shipping, vice chairman of NITI Aayog and CMs of the states to which the jurisdiction extends.