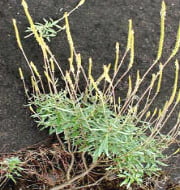 Two new plant species were discovered in Edmalayalar, Pooyamkutty-Adamalayar and Neriamangalam forest regions of Western Ghats in Ernakulam district of Kerala.
The discovered species have been christened as Vellithumpa and Eriocaulon manoharanii.
They were discovered by a team of researchers led by Professor C.N. Sunil during investigations conducted as part of a UGC-sponsored project on the flowering plants.