Phase I of Trade Deal Signed between US and China 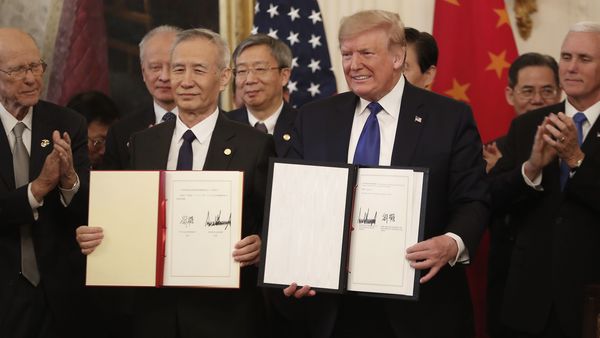 After 18 months of barbs and sanctions, the two economic powerhouses of the world, the United States and China have signed the Phase I of the trade deal on Wednesday, 15th January 2020 that have bought a long-anticipated relief for manufacturers of both the countries and to the rising economic slowdown globally. The agreement which relaxed sanctions imposed on Chinese imports by the US was inked between the Vice-Premier of China, Liu He, and the US President Donald Trump, under which for reducing the trade deficit of US, China will also be purchasing farm products worth USD 40 billion every year from the US. Following the signing, the US President termed the deal as an ‘Unbelievable deal’ while his Chinese counterpart, Xi Jinping called it ‘Good for China, the US and for the whole world’.

As the US heads for its 59th Presidential Elections in November this year, the deal will be highlighted as major economic progress by the US President Donald Trump for his presidential campaign.