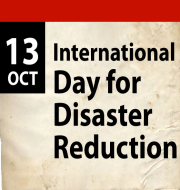 The International Day of Disaster Risk Reduction (IDDRR) was begun in 1989 by the United Nations General Assembly. The purpose of the day is to promote global culture towards risk awareness and disaster reduction. It celebrates how people and communities around the world reduce their exposure to disasters. Also, the day raises awareness towards the importance of reining in the risks that are faced by the global citizens.

Significance of the Theme

The theme is one of the seven targets of Sendai framework. It focuses

As the death tolls due to tsunamis and earthquakes is increasing, it becomes essential to ensure if schools and hospitals are following regulations and building codes. The other areas of critical infrastructure that requires frequent monitoring includes potential life – saving utilities and services like energy, food and water supply, telecommunications and transport.

In 2015, the UNDRR – United Nations Disaster Risk Reduction launched the Sendai Seven Framework. It is a campaign that integrates all the organizations including government, NGOs, local governments, community groups, private sectors, etc. to promote the best practices to reduce disaster risks and disaster loses.

It was adopted by the UN at the World Conference on Disaster Risk Reduction that was held at Sendai, Japan. It is the successor agreement to the Hyogo Framework for action (2005 – 2015).

International Association for Preparedness and response

It was formed in 1962. It is a non – profit organization that has volunteers and associations active in preparedness schemes and calamity emergencies. It provides resource distribution, professional networking and leading opportunities in response to disasters.