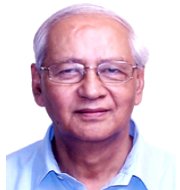 Noted labour economist Dr. T.S. Papola passed away in New Delhi. He was 74.
He had served as an advisor with the erstwhile Planning Commission of Union Government for eight years from 1987 to 1995.