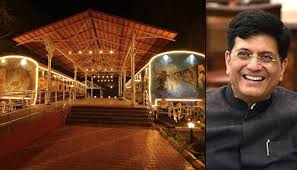 The Ministry of Railways has inaugurated a dedicated museum for railways in Hubballi, Karnataka, through video conferencing. This is the first of its kind museum in Northern Karnataka and second in South Western Railways after the historic railway museum at Mysore, Karnataka.

The main objective of the museum is to preserve and portray the glorious heritage of various branches of Railways and displays the gradual evolution of advanced systems in all spheres of Railway.

The architecture of the Museum

The artefacts have been arranged in three sections – Malaprabha, Ghataprabha and the outdoor section. There is a grand arch at the entrance of the museum that welcomes one to the bygone era. This will be embellished with emblems of forerunners of South Western Railway, that served this region, which is Southern Mahratta Railway, Mysore and Southern Mahratta Railway, etc. and will attract the visitors to explore the world of Railways.

What all will be there in the museum?

Two narrow-gauge locomotives are the prime attraction in the Museum. All the exhibits that run on the track and are related to tracking such as Rolling Stock (engines), Coach, wagon, tanker, Permanent way material like Rails, sleepers, Level Crossing Gate, signals, etc. are provided in the galleries set up. A narrow-gauge coach is there that depicts ‘unity in diversity’ with life-size statues of passengers from various parts of the country. There is a majestic platform with ornate pillars giving access to the restaurant car and Theatre Car. Short movies and videos that are both entertaining and educative are also planned in this museum at fixed show hours in the coach Theatre.