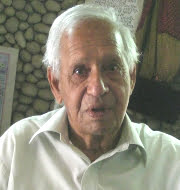 Nek Chand Saini, creator of Chandigarh’s iconic Rock Garden passed away on 11 June 2015 in Chandigarh. He was 90.
He was born in Berian Kalan village in Shakargarh region (now in Pakistan).  He was as a self-taught Indian artist. He had emigrated to India with his family during the partition in 1947 and had settled in Chandigarh in 1950.
In 1951, Nek Chand had started working as a road inspector of the Chandigarh’s Public Works Department (PWD). During this time Chandigarh was redesigned as a modern utopia by the Swiss/French architect Le Corbusier and became first planned city in India.
Awards: Nek Chand was awarded the Padma Shri in 1984.

Initally, Nek Chand Saini had built Chandigarh’s iconic Rock Garden secretly from waste and other unused household materials in a forest near Sukhna Lake which is spread over an area of 40-acres.
His secret environmental marvel was later discovered in 1972 by the municipal authorities. Later he was provided with a team of labourers and financial support to enable him to continue his work.
The site famously came to be known as the Rock Garden. It was officially recognised in 1976 and became a key tourist attraction of Chandigarh.