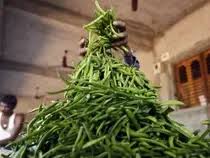 NCDEX’s guarseed option is one of the most liquid contracts on the exchange platform. Its three options contracts in guarseed will expire in February, March and April 2018 and will be made available for trading.
NCDEX is second exchange after MCX to launch options trading in commodities. In October 2017, MCX had launched gold options. Market regulator SEBI had allowed NCDEX to launch options in September 2016 and later had clarified that options will have futures as underlying for settlement.

Options are derivatives which give a buyer right but not obligation to buy or sell an underlying asset or instrument at specific price on or before a certain date. The option trading is powerful tool to hedge price risks and will boost the development of agri-commodity market. It is considered as one of major steps towards taking farmers out of situation resulting in drastic fall in prices of some agri-commodities due to higher production. This initiative will benefit farmers and ensure better prices for their produce in the coming days.

Guar gum is extracted from guar seed which is used by drilling companies to thicken water mixed with sand and pumped through shale rock cracks to extract gas. It is also used as thickening agent in products such as ice cream, bread, pasta, sausages and pastries.
North American oil and gas industry are mostly uses guar gum from India. Increase in crude oil prices creates demand for guar in North America’s shale gas industry. Rajasthan, Haryana and parts of Gujarat are major guar producers in the country.