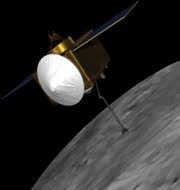 NASA’s Origins, Spectral Interpretation, Resource Identification, Security-Regolith Explorer (OSIRIS-REx) spacecraft has found water locked inside asteroid Bennu. Bennu is too small to have ever hosted liquid water, but this finding does indicate that liquid water was present at some time on Bennu’s parent body, a much larger asteroid.

It launched in September 2016 is NASA’s first asteroid sampling mission i.e. it will survey surface, collect sample and deliver it safely back to Earth. It had reached its destination Bennu asteroid in December 2018 after travelling through space for more than two years and travelling over two billion kilometres. Samples returned by the mission to Earth in 2023 will enable scientists to find new information about the history and evolution of our solar system.

It is near-Earth carbonaceous asteroid about the size of a small mountain in the Apollo group. It was discovered in September 1999 by the LINEAR Project. It is one of oldest known asteroids which is considered as remnant from early in formation of solar system and orbits close to Earth’s path around Sun.. It is carbon-rich asteroid and believed to be the type of asteroids that may have chemical building blocks of life, along with lots of water. So, analysis of returned sample from it could help to reveal key insights about early solar system and the origin of life on Earth. It is potentially hazardous asteroid and there is very slight chance it could strike into Earth in the late 22nd century.