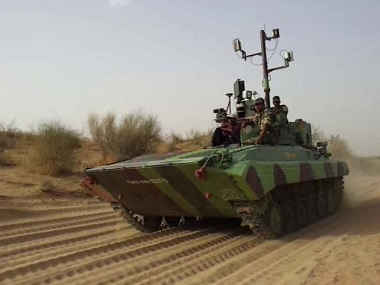 The Defence Research and Development Organisation (DRDO) has rolled out Muntra, India’s first unmanned, remotely operated tank at its Chennai lab.
It has been launched in three variants Muntra-S, Muntra-M and Muntra-N for surveillance, mine detection and reconnaissance in areas with nuclear and biological threats.  It is also likely to be used in Naxal-hit areas.

Muntra-S is the country’s first tracked unmanned ground vehicle (tank) developed for unmanned surveillance missions. Muntra-M is for detecting mines and Muntra-N is for operation in areas where there is nuclear radiation or biological weapon risk.
The Muntra variants have surveillance radar, an integrated camera along with laser range finder which can be used to spy on ground target 15km away – heavy vehicles or crawling men. This unmanned, remotely tele-operated tank has been successfully tested and validated at Mahajan field firing range in Rajasthan under dusty desert conditions.