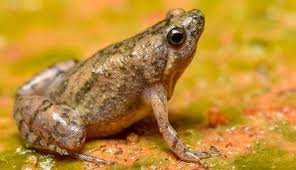 Scientists have discovered new frog species named Microhyla kodial or Mangaluru narrow-mouthed frog in a small industrial region in coastal Karnataka. It is christened Microhyla kodial after city of Mangaluru (called kodial in Konkani language) from where they spotted it two years ago. The frog is seen only in small industrial region which was former timber dumping yards wurrounded by seaport, petrochemical, chemical and refinery industries.

Mangaluru narrow-mouthed frog belongs to Microhyla genus which is primarily recorded from south Asia. It is small in size measuring just 2 cm long. It is greyish-brown in colour with thick olive-green band on its head, less-prominent dark green bands on rest of its body. It has very distinct loud, long calls. It is not seen outside urban area and its behavioural observations revealed that it breeds only during monsoon.
Its detailed genetic studies show that it is more closely related to Southeast Asian frogs than Indian frogs. The industrial patch where it is currently found used to be depot for timber imported from southeast Asia, therefore, it could have been accidentally introduced with timber that came from Myanmar, Malaysia and Indonesia.
Mangaluru narrow-mouthed frog was the 42nd species belonging to genus Microhyla recorded from south Asia. More than 650 microhylids (frogs belonging to the family Microhylidae) are found across the world’s tropics.