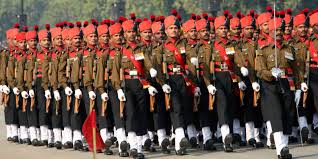 The Maratha Light Infantry celebrated 250 years of its existence on 4 February 2018. The first battalion of regiment was raised as ‘Second Battalion Bombay Sepoys’ on this day in 1768.

February 4 is celebrated as “Maratha Light Infantry Day” across the regiment throughout the country. The date holds historic significance as on this day in 1670, Maratha ruler Chhatrapati Shivaji conquered famous Kondana Fort (now known as Sinhgad) near Pune, Maharashtra.

The Maratha Light Infantry is infantry regiment of the Indian Army. It was formed in 1768, making it most senior light infantry regiment of the Army. At present, it has around 21 regular battalions, four Rashtriya Rifles battalions, and two Territorial Army battalions. It is the only regiment which has contributed two battalions of special forces to Indian Army.
The regiment also has an affiliation with 10 Mechanised Infantry regiments, two artillery regiments and an air defence regiment in the Army. It also has inter-service affiliation with Indian Naval Ship (INS) Mumbai, 20th Squadron Air Force (Sukhoi) and Indian Coast Guard (ICG) air station in Daman and Diu.

The Maratha Light Infantry was bestowed with rare honour of winning two Victoria crosses to two of its soldiers- N.K. Yeshwant Ghadge and Sepoy Namdev Jadhav. It was also first infantry regiment of the Army to be awarded the title of ‘Light Infantry’ during the First Afghan War in 1841. It also has proud history of gallantry as it was honoured with 15 battle honours in the First World War.