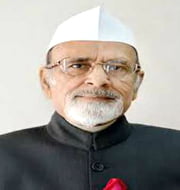 Manipur Governor Dr Syed Ahmad passed away in Mumbai, Maharashtra. He was 75.
He was sworn in as the 16th Governor of Manipur in May 2015. Prior to this he had served as the eighth Governor of Jharkhand from August 2011.
Dr. Ahmad was a senior Congress leader. He had served as the cabinet minister on two occasions during the Congress regime in Maharashtra.
He was elected to Vidhan Sabha (state legislative assembly) for five times from the Nagpada constituency in Mumbai. He also served as a state minister in Maharashtra.
Dr. Ahmad was also a writer and has authored Maktal se Manzil, Kafas se Chaman and Jange-Azaadi Me Urdu Shayari. His autobiography is Pagdandi se Shahar Tak.