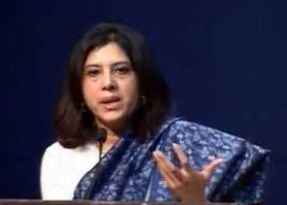 The Union government has appointed advocate Madhavi Goradia Divan as the Additional Solicitor General (ASG) in the government of India. She will hold office of ASG till 30 June, 2020 and will appear in the Supreme Court on behalf of the government of India.
She is the third woman to hold the post of ASG.  Senior advocate Indira Jaising was the first woman in India to become ASG. Pinky Anand was the second woman and she still holds the post.

The Additional Solicitor General of India, also known as the ASG,  is the third-ranked law-officer in the Indian government. The post of ASG is not constitutional as the constitution does not have any provisions regarding this. The seat of the Additional Solicitor-General of India may be at New Delhi or Mumbai or Chennai or Allahabad as the Government of India specifies.