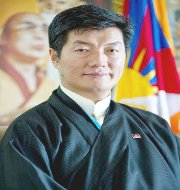 The Tibetan government-in-exile has re-elected Lobsang Sangey (48) as the Prime Minister for a second consecutive term.
The election result was announced by the Tibetan election officials in the northern Indian town of Dharmsala which is the headquarters of the government-in-exile.
Sangey secured about 58 percent of the 58,740 votes cast. He defeated his only rival Penpa Tsering, Speaker of the Tibetan Parliament by 9,012 votes.
The 2016 general election was the second election since the Dalai Lama had stepped down as head of the government-in-exile in 2011 to focus on his role as the Tibetans’ spiritual leader. Tibetans living in exile in 40 countries had casted their votes for this election.
Sangey was born in Darjeeling, West Bengal. He had completed his studies in Delhi, before going for higher education in the US. He was a senior Fellow at the Harvard Law School.
Tibet Issue