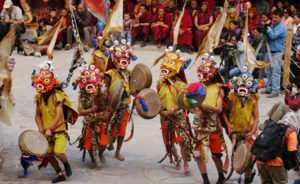 The 23rd edition of Sindhu Darshan Utsav 2019 started at Sindhu Ghat Shey in Leh from 24 to 27 June. It was inaugurated by Skyabje Choskyong Palga Rinpoche.

Background: The “Sindhu Darshan” or Sindhu festival was first started in month of October 1997, for celebration of unity, communal harmony along with national integration.

Objective: The festival aims at projecting Indus (or Sindhu) as a symbol of India’s unity, peaceful coexistence and communal harmony and is also a symbolic salute to brave soldiers of country.

On 1st day of festival participants from all religions, castes and regions are welcomed and there is a reception on banks of Sindhu at Shey (about14 km from Leh). Utsav begins with prayers being offered to River Indus in which large group of people take part in ritual on-board boats.

River Indus (or Sindhu): stands for peaceful coexistence and communal harmony and is a symbol of our India’s identity and civilization.

Sindhu Yatra: undertaken during the festival helps forge a bond of unity among people who live in India’s far-flung corners thus providing them an opportunity to visit beautiful region of Ladakh.

The Sindhu Darshan festival conveys a strong message of uniting different religions and faiths, as it connects people from different faiths on one common platform to share love, compassion and respect for each other which is also the essence of every religion.

The festival helps to bring Ladakh on global map and provide a boost to its tourism industry thus helping Ladakh economically.

It also spread awareness about taking care of environment and its cleanliness is another purpose of the festival.