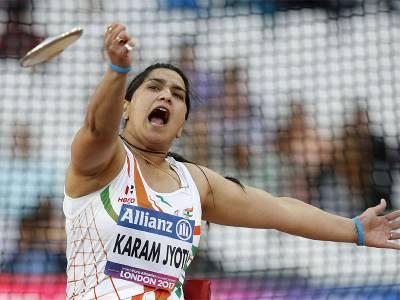 India’s Karamjyoti Dalal has won bronze medal at the World Para Athletics Championships 2017 in the discus-throw. In the women’s F55 category of discus-throw, she managed a throw of 19.02 m.
Earlier, Sundar Singh Gurjar had opened India’s account at the 2017 World Para Athletics Championships by winning gold medal in the men’s javelin throw event. Later, Amit Saroha won silver medal in the club throw event in the F-51 category.

Karamjyoti Dala was originally a part of the national Kabaddi setup. But she had to give up the sport after she took a fall from her terrace, that resulted in her losing her motor sensations for a year. But she took up discus throw in 2014. Since then her performance has gone from being unranked in the top-10 in the world. Currently she is ranked World No.8. She had secured a fourth-place finish at the IPC Para-athletics championships in 2015. She had won two bronze medals at the 2014 Asian Games held in Beijing, China.