Kalimantan: Indonesia to move capital from Jakarta to Borneo Island 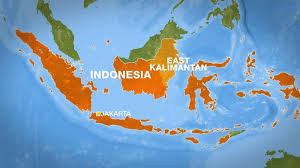 Reasons for shifting of capital city

Indonesia’s current capital, Jakarta, is home to more than 10 million people. It climate-threatened megacity as it has some of the world’s worst air pollution and traffic congestion. Poor urban planning has left 40% of the city below sea level.

The shifting of capital city is part of a broader strategy to decentralise Indonesia’s economic growth as Jakarta is home to 60% of the country’s population and accounts for over half of its economic activity.

Kalimantan is almost four times bigger that Jakarta, but accounts for less than a tenth of the gross domestic production (GDP). It is also much more central in Indonesia’s archipelago of 17,000 islands.

It is the third-largest island in the world and the largest in Asia. It is home to some of the world’s greatest tropical rainforests. It is politically divided among three countries: Indonesia, Malaysia and Brunei (see map below). Kalimantan is Indonesian portion of the island of Borneo and it comprises 73% of island’s geographic area. The most active volcano of Indonesia, Mt Merapi, recently erupted with a river of lava and searing g...

The top palm oil producers for the first time are looking for opportunities to run an advocacy campa...

Indonesia to use ‘artificial rain’ to combat forest fires

The Indonesian government has announced that it would deploy ‘artificial rain’ ahead of peak dra...

9 people were killed in an illegal gold mine in West Sumatra province of Indonesia due to landslides...